I recently stumbled upon a post by Simon Willison where he promotes the idea of annotated release notes. As it turns out, this release is, by any metric I can think of, the biggest and most transformative so far. The associated change log is consequently rather unwieldy and calls, you guessed it 💡, for the present annotated release notes.

(Note: although the original release notes are extensively quoted in this article, I reshuffled and shortened the original material. Make sure to check the base material for an authoritative list of change.)

Metadata is data which says something about other data, and vpype lacked such a thing. Until now, what was passed from one command to the next consisted exclusively of paths sorted into layers, without any context such as what the color of these paths might be. One command could “know” about something (e.g. read knows, from the SVG, the color of a layer), but it could not “tell” the next command(s) about it.

This is no more, thanks to properties. They offer a generic mechanism to attach data to pipeline and layers. They are the backbone of several features introduced today, and lay the ground for future features within vpype or in plug-ins.

Supporting arbitrary layer colors, pen widths, and names, has long been amongst the most requested features. Well, thanks to properties, here they are. It happens automagically when using read, and the new commands can further customise these values: 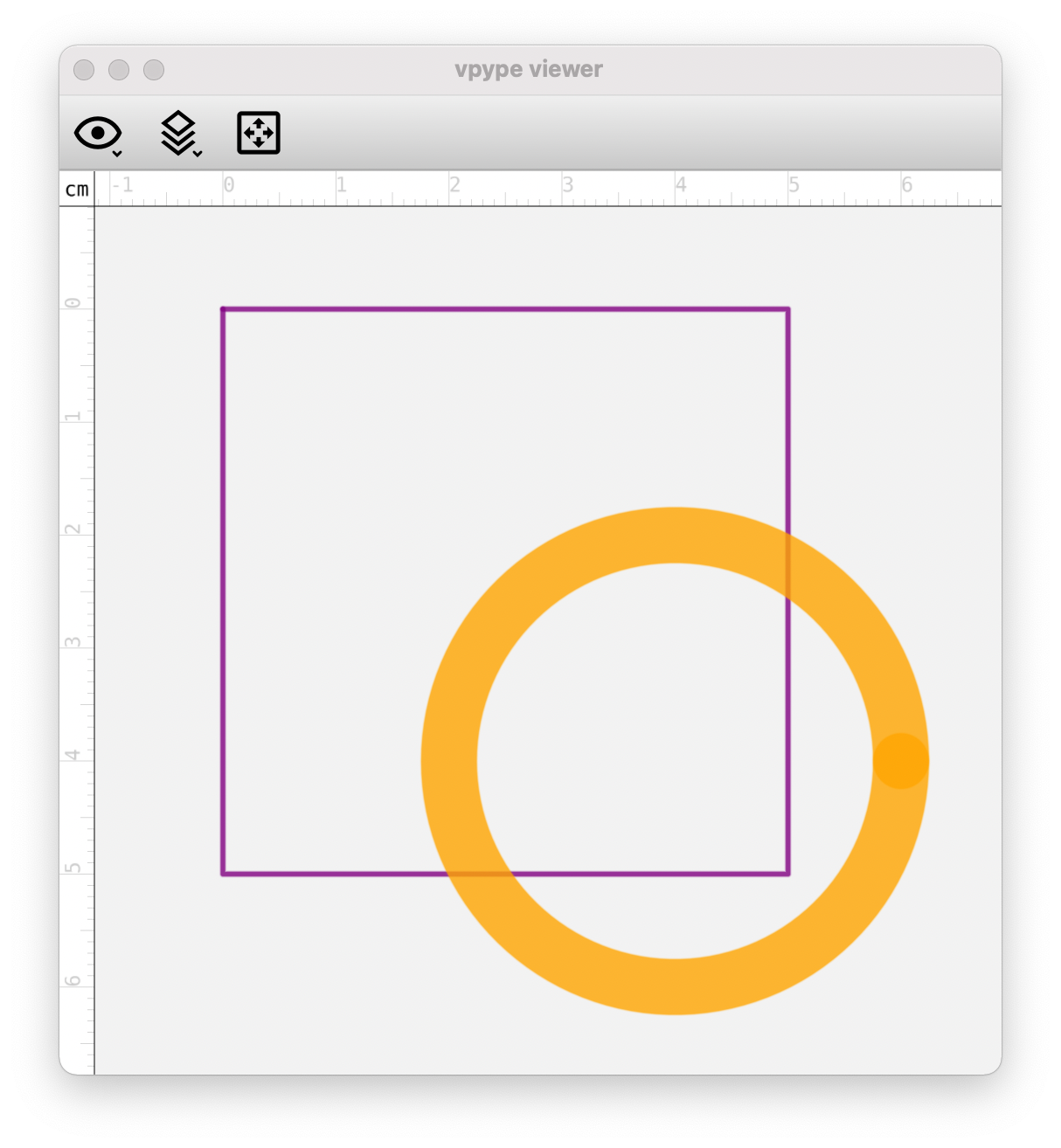 System properties differ from “regular” properties only in the sense that they have special meaning to vpype. By convention, their name is prefixed with vp_.

Special mention for the new pens command, which is short for here is the set of pens I intend to use for this plot. It sets in bulk layer colors, pen widths and/or names all at once, based on a built-in or custom configuration. For example, this produces a CMYK SVG using the flow imager plug-in:

These are low-level commands to interact with properties. Although they have limited use in real-world workflows, they come in handy when learning about properties or crafting complex pipelines.

With properties, some of the layer manipulation commands became somewhat ambiguous. For example, what happens with properties when using lmove all 1 (merges all layers into layer one) or move --prob 0.5 1 2 (picks geometries from layer 1 with a 50% probability and moves them to layer 2)?

From SVG attributes to properties#

As noted, the read command now tries to extract SVG attributes and store them as layer properties. There are two motivations for that. First, it enables the write command to optionally restore these attributes in the output file, in order to achieve a higher degree of fidelity. (This feature is experimental and opt-in for the time being.) Second, it enables future features or plug-ins to do neat things such as generating hatch fills when fill is set to a color, or cutting paths in bits to emulate stroke-dasharray if defined.

Now, since properties are only available at the layer level (or globally), read discards SVG attributes that are not shared amongst every paths within a given layer. Let’s take an example:

This SVG only contains top-level elements, which vpype loads in layer 1 by default. The fill property is common to all paths and thus stored as a layer property, but the stroke and stroke-width attributes are heterogeneous and thus discarded. As a result, the show command uses the default color and pen width. 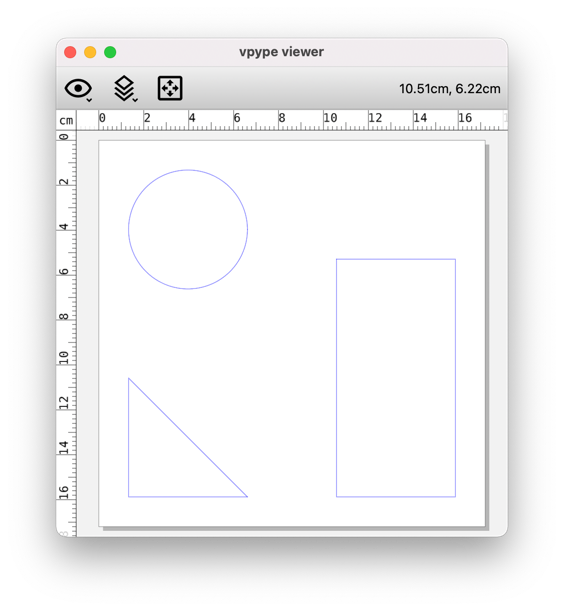 To address this issue, the read command has now the option to create layers based on SVG attributes instead of structure: 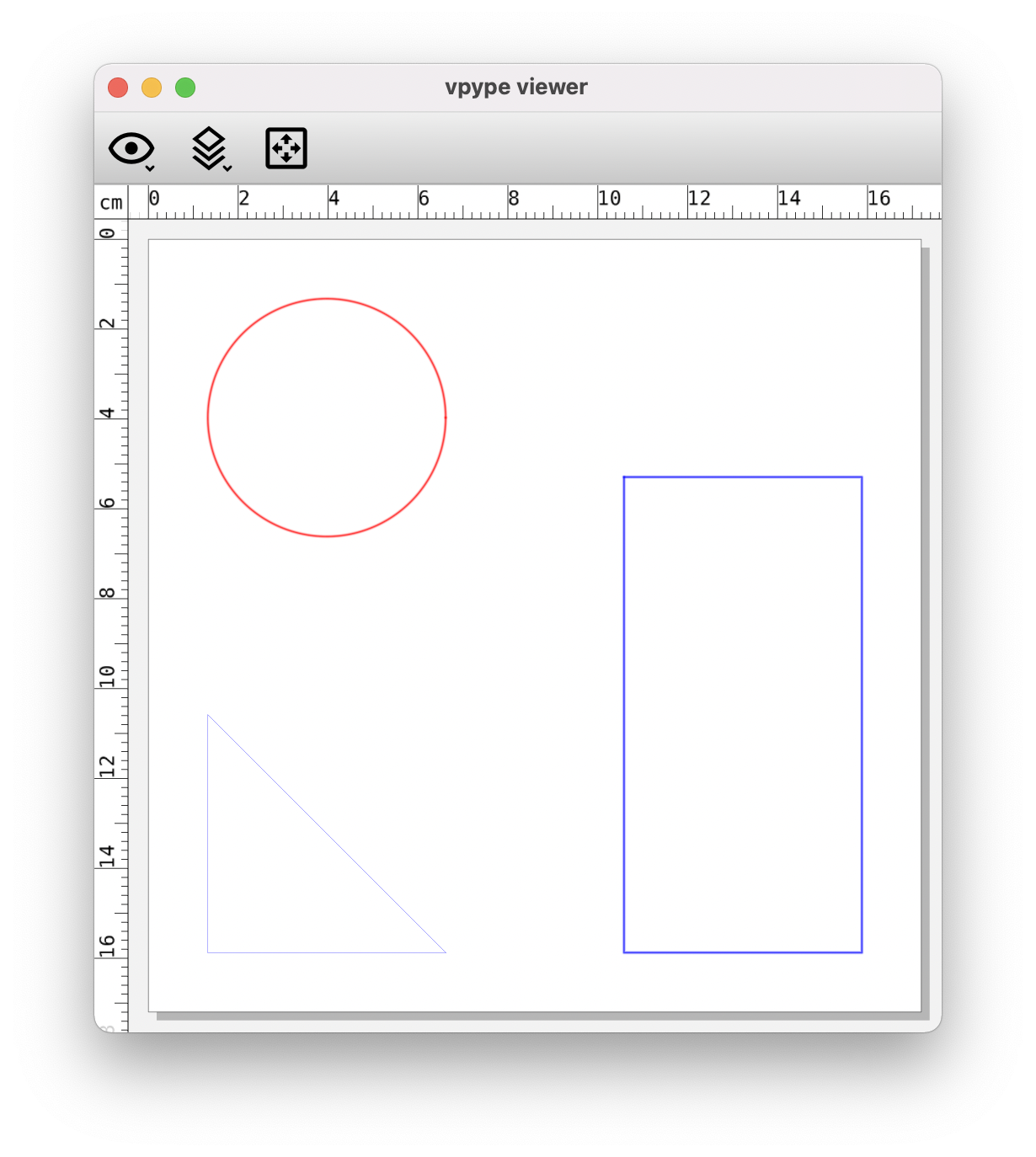 In this case, read creates one layer per unique combination of stroke and stroke-width attribute, resulting in a total of three layers, each assigned with the correct properties, and correctly displayed by show.

This is, for example, what happens when using read twice:

Here, vp_source points to the file read by the last read command, but vp_sources contains all two source files.

Currently, read is the only command which sets these variables, but the idea is that any command involved with reading a file (SVG or otherwise) should set these properties, including plug-ins such as hatched, flow imager, or vpype-embroidery.

One of the most common use case is to name the output file after the input file:

Note the use of a property substitution pattern, which brings us to the next topic.

This is where things start becoming “meta”! 🤯

As shown in the previous example, the value of a property may now be used anywhere as input using property substitution patterns.

Here is another example where the full path of the input file is drawn and displayed: 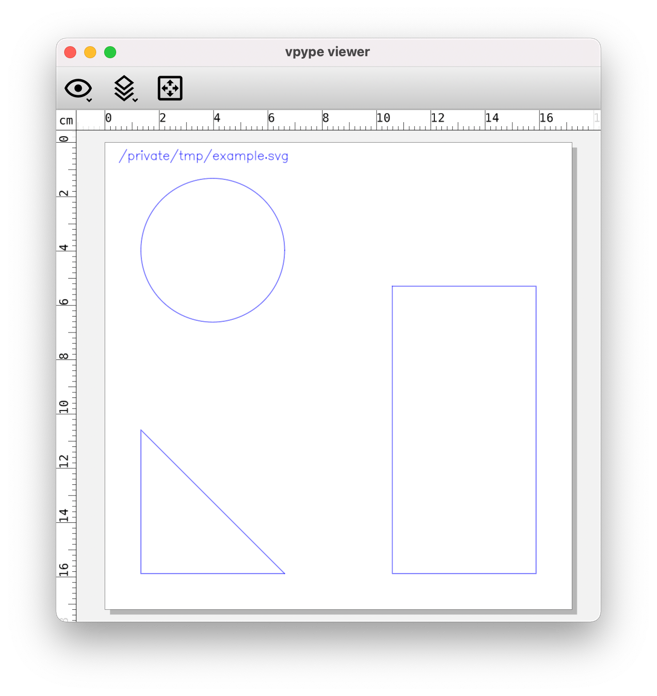 Again, vp_source is a pathlib.Path instance, so {vp_source.name} (file name) or {vp_source.stem} (file name without extension) could be used instead.

Multiple substitution patterns can be combined and mixed with regular text. For example, this creates an output file in the same directory as, and named after, the input file:

Of course, when using vpype interactively, it’s easier to simply spell out the output file name. Instead, this kind of mechanism makes it considerably easier to write generic, reusable shell scripts.

Note that, since property substitution internally relies on Python’s str.format() function, the number formatting mini-language is available as well (e.g. {vp_pen_width:.02f}). See the documentation for some examples.

Now, taking a step back, this feature is neat indeed, but its usefulness turns out to be limited in many non-trivial, real-world scenarios. I had hoped it would unlock several workflows I had in mind, but it just did not - or not elegantly enough. So much so that I even considered dropping the feature altogether.

This was a bit frustrating, to say the least. And ultimately lead to what is the next big chapter of this release.

This is possibly the most transformative feature brought to vpype since its inception: anything between pairs of % characters is now evaluated as (a sub-set of) Python code, and the result is substituted in the input before it reaches the actual command. The documentation has been updated with a whole new section about expressions (which I’m not going to repeat here), and the cookbook has plenty of examples making use of them. Do check them out for a taste of what expressions are capable of!

Here are my thoughts about this:

Though expressions can be used in any command’s input, some “space” dedicated to them in the pipeline can be useful. Typical cases include variable initialization or querying the user for some parameter with the input() function. Several examples shown or linked below make use of this.

Block processors hardly got any love since the first release of vpype and, as far as I can tell, weren’t used much - if at all - due to their limitations. Properties and expressions completely reverse this situation and block processors are now where the magic happens. The changes above lay the ground work for this.

That’s two new block processor commands, and another two finally coming to life, plus a few changes to make them work better with real-world workflows.

One of the key changes is that block processors now set temporary expression variables (prefixed with _) that can be used in the nested pipeline. They are listed in each command’s help text:

Another novelty is the introduction of two new block processor commands:

This example, taken from the grid layout recipe, demonstrates best what vpype 1.9 is about:

It creates a grid layout from multiple SVG files, combining layers using their name (e.g. all “yellow” layers in input files are merged in a single “yellow” layer in the output file). Check the recipe for a detailed explanation.

This pipeline has it all:

Here is how it looks when run on my Machine Typography #ptpx project: 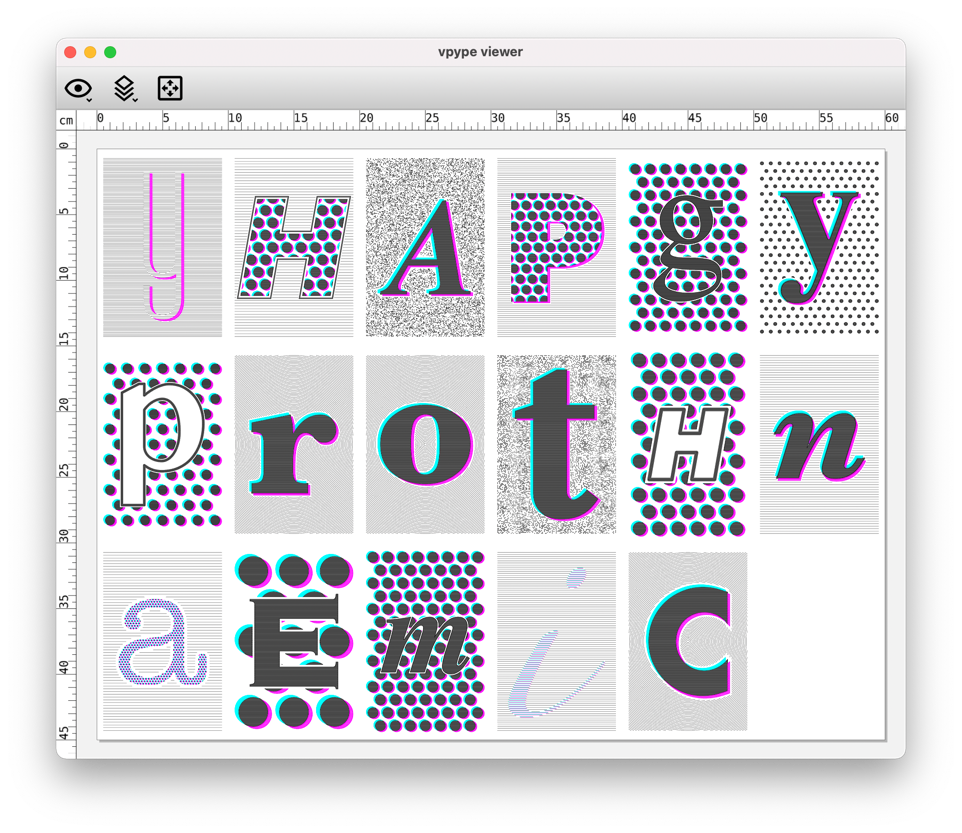 Note: This is the last version of vpype to support Python 3.7.

It’s the year of the walrus for vpype! 🦭

There was formerly no way to delete all layers but one. The new --keep option fills this gap.

This change is relevant when developing jointly on vpype and another project that depends on it (e.g. vsketch, or some plug-in). In such cases, vpype can now be installed in editable mode from a local checkout. Modifications made to it will immediately be available to the dependent project:

That’s a two-year-old bug I can’t believe I hadn’t seen before 🙄 (I use random a lot when testing out stuff during development.)

This is the config file bundled with vpype. It used to be called hpgl_devices.toml, but now it also contains the build-in configurations of the new pens command (cmyk and rgb). The old name didn’t make sense anymore.

This release comes with scores of changes at the API level (to many to list here). Two of these changes deserve a note though.

First, a fair amount of infrastructure used by the vpype CLI (e.g. the @generator decorator and friends) used to reside in the vpype package instead of vpype_cli. This is not ideal for many reasons and I’m moving away from it. vpype should be a “pure” library, whereas vpype_cli should contain everything needed for its CLI (and for plug-ins). These are not yet breaking changes but will generate deprecation warnings with most plug-ins. I will ensure that they are fixed ASAP.

Secondly, as part of the block processor overhaul, the @block_processor decorator had breaking changes without backward-compatible deprecation. I am not aware of any third-party code actually using it, so this shouldn’t cause any issue.

Congrats if you got this far! 😲🏆

I hope you’ll enjoy vpype 1.9 as much as I sweated preparing it. 😅

Feedback is welcome, via discussions for support/suggestions or issues for bugs. As always, I hang out on the drawingbots.net’s Discord server and am available for a chat.

Contributions are most welcome too, and the documentation is one area where help is always beneficial. I’ve gathered a few ideas of what can be done here.

To conclude, here are my probable areas of focus for the coming weeks/months: